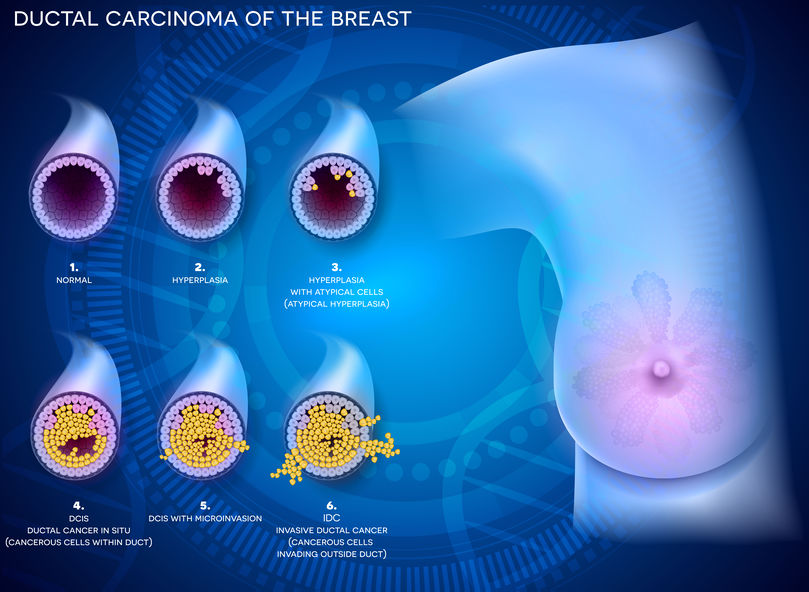 The initial treatment for DCIS is always surgery. There are two surgical approaches to DCIS treatment: lumpectomy, or a total mastectomy.

Lumpectomy is a surgical procedure that removes the breast lump or suspicious tissue seen on the mammogram and some surrounding tissue as well. Lumpectomy is also called “breast-sparing”, “breast-conserving” or “segmental mastectomy”.

Generally, lumpectomy is the first step in breast-conservation therapy. Lumpectomy is usually performed in an outpatient setting using local anesthesia. However, general anesthesia can be used for greater patient comfort. If cancer cells are present at the margin (the edge of the biopsied tissue), a re-excision needs to be done to remove the remaining cancer. If you are large-breasted, most of your breast can be preserved and you will still have the image you are accustomed to. If you are small-breasted and need additional surgery, lumpectomy may not result in a good cosmetic result; mastectomy with reconstruction can be a good option.

Lumpectomy alone is the adequate treatment if:

Lumpectomy alone carries special concerns and considerations. Because the remaining breast tissue is not treated with any other intervention, there is the possibility that if the woman lives many more years, she can develop cancer — either DCIS or invasive cancer in the same breast. This option is only effective for carefully selected patients with early, small DCIS lesions with very easily interpreted mammograms. Comedo-type DCIS tends to be more aggressive and careful judgment needs to be used in offering lumpectomy alone in women with this cell type of DCIS.

This is a surgical procedure in which the entire breast is removed but not the lymph nodes under the arm or the muscle tissue from beneath the breast. The nipple will be removed in this procedure, but much of the original skin of the breast may be preserved.

Simple mastectomy is used to treat noninvasive breast cancer and is one way to remove DCIS that is multifocal (appears in many places within the breast). The surgeon does not need to remove lymph nodes from under the arm, because DCIS does not spread to the axillary lymph nodes.

If invasive cancer is found, the surgeon will remove the entire breast tissue and some lymph nodes, which is important to determine the spread of the disease. This is called a modified radical mastectomy. When lymph nodes are removed, there is a small risk of lymphedema, or swelling in the arm.

Simple mastectomy is appropriate management for all kinds of DCIS. It is the only recommended treatment for multifocal DCIS, extensive DCIS, or DCIS that has recurred after lumpectomy and radiation therapy. This procedure is a relatively short surgery, requires general anesthesia, with a short hospital stay followed by a quick recovery. Reconstructive surgery to recreate the breast can be done immediately at the time of mastectomy or at a later date. The recurrence rate and overall chance of dying from cancer after simple mastectomy is between 0 and 2%.

Women who have the simple mastectomy procedure rarely have difficulties with shoulder movement or arm swelling after surgery. As compared to a modified radical mastectomy, the surgery time is shorter and the recovery period faster.

If a simple mastectomy is chosen as a treatment for DCIS, radiation therapy is not needed following the surgery.

Modified radical mastectomy is a surgical procedure in which the entire breast and some or all of the nearby lymph nodes are removed. Underlying muscles are left intact. This procedure is not usually used for the treatment of DCIS, but may be used if invasive breast cancer is found.

If lumpectomy is chosen as the surgical method, the remainder of the breast is usually treated with radiation to minimize the chances of having a recurrence of DCIS in the breast. If, after biopsy, there are cancer cells present at the margin (the edge of biopsied tissue), and excision can usually be done again to remove the remaining cancer cells. Radiation treatment is usually begun three to four weeks after the lumpectomy or when the wound has healed.

Radiation therapy is used to destroy any cancer cells that may be left behind in the breast. Radiation treatments are usually given five days a week for six to seven weeks. The daily sessions take only a few minutes each.

The side effects of radiation can include swelling and heaviness in the breast, sunburn-like skin changes in the treated area, fatigue, and loss of appetite. For some women, the breast may become smaller, firmer, and more tender after radiation therapy.

These common side effects generally begin toward the middle of the treatment and continue for a short time after the completion of radiation. The side effects are usually gone within six months to a year. Radiation can only be used once for primary treatment because the breast does not tolerate repeated radiation therapy at the doses required to eradicate cancer.

Radiation therapy after lumpectomy is considered an adequate treatment in the following situations:

Some of the problems with having lumpectomy and radiation therapy are:

Lumpectomy with postoperative radiation therapy may not be appropriate for:

If a woman is pregnant when diagnosed with DCIS, radiation therapy may be delayed until after completion of her pregnancy because DCIS is not an emergency. Although radiation is often delayed, surgery can be safely performed during her pregnancy or can be done after the birth of her child with no compromise to the mother.

If you are choosing which kind of surgery to have, here are some facts that will assist you in your decision-making:

Information. Before discussing treatment options, the doctor needs to conduct a physical examination and ask your medical history. This will include questions about your family history, such as the following:

The doctor will use this information and the pathology results to determine which therapies are most suitable for you, and will then discuss treatment options with you. To summarize: Most women and their doctors prefer lumpectomy and radiation therapy rather than mastectomy. The advantage of lumpectomy is that it may save the appearance of your breast. The disadvantage of a lumpectomy is that it is followed by several weeks of radiation therapy. Unfortunately, for some small-breasted women, a lumpectomy may be very disfiguring, and a simple mastectomy with reconstruction may be a better cosmetic option.

Your individual feelings, attitudes and values may be just as important as the scientific facts in weighing your options. As you consider your choices, think about the following questions:

Remember, lumpectomy and radiation for the treatment of DCIS are not appropriate if:

Furthermore, lumpectomy and radiation as treatment for DCIS may not be appropriate if:

No comments to show.